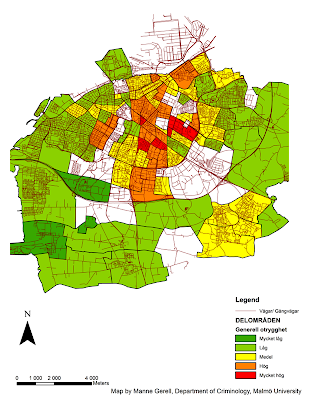 Avoidance behaviour - some results from a case study of 4 neighborhoods


Between 2010 and 2012 I worked on a case study of the multi-family housing part of four neighborhoods in the city of Malmö. The main focus of the study was on the connection of social capital/collective efficacy and physical disorder in the form of vandalism, graffiti and arson, but fear of crime was also discussed extensively. The study included a fairly wide array of methods, including key informant- and focus groups interviews, systematic social observation (SSO) of disorder and a community survey. The final report of the project (Gerell 2013) which I submitted in august the 2012 did not (due to time constraints) include all survey-responses that were mailed in (see below), and did not include multi-level analysis of responses. I have since re-visited the full data-set with some additional analysis, and in this blog post I will present some findings related to fear of crime and avoidance behavior. This is data that I don’t believe I will ever try to get published in an academic journal, but I did write some up of it up for a presentation I held in a research discussion group with members from the municipality, police, rescue services and academia and so I might as well make it more publicly available as well.

In the study we wanted to get a deeper understanding of community level processes by focusing on four neighborhoods. Four adjacent neighborhoods in the southern part of the city of Malmö were selected. Two of the neighborhoods are included in the municipality “area programs” which are targeted at especially troubled neighborhoods. Of the other two neighborhoods one is made up of tenant ownership associations with a fairly old population and the other is made up of rental apartments, about half of which are public housing with fairly low income levels. The project was focused on multi-family housing, and therefore excluded single-family housing present in two of the neighborhoods and a fairly large retirement home section in one neighborhood. The total population of the studied parts of the neighborhoods is about 12 000, with the tenant ownership association neighborhood significantly smaller than the other three. A downside to the multi-family housing focus is that official registry data is based on the neighborhoods as a whole, and thus direct comparison to registry data is not possible. In my report I did attempt to make some comparisons to official data to assess whether respondents of the survey were comparable to the population as a whole. It can be noted that among respondents there are far too many in the oldest age group (age over 60), too many females and too few young persons. Compared to a large survey of Malmö recently completed by my department the differences in this study are similar, but larger.
An early result in the project was that neighborhoods were percieved by respondents in key informant and focus groups interviews to be too large to capture social processes of interest. The four neighborhoods were therefore divided into twelve micro-neighborhoods, with an average of about 1000 residents each. Each micro-neighborhood has its own access road, often giving the micro-neighborhood its name, and parking lot, contributing to the routine activities of the location. In this text micro-neighborhoods are used as level 2 units.

The sample for the community survey was constructed by mapping all addresses (each address consist of one stairwell with apartments) in the multi-family section of the four neighborhoods (N=416), then randomly sampling one address from each yard (N=59), and an additional 28 addresses sampled from the remaining 357. Out of the total 87 sampled addresses entrance was achieved to 86 which make up the final sample in the study. In each of the 86 addresses every household was included for a total of 1255 sampled households, with a total of 689 responses (54.9%). Within households the sample was non-random, whoever opened the door when the staff came knocking. The community survey was performed with the aid of the city part municipality between April and June 2012, with six persons from the studied neighborhoods recruited to knock doors for the survey. They were recruited based on attachment to the local community and knowledge of appropriate languages, covering the three main language groups of residents with foreign background living in the four neighborhoods (two interviewers each fluent in Albanian, Arabic and Afghan languages (Pashto/Dari)). Sampled households that couldn’t be reached received a response-envelope and instructions on how to mail their survey in.

The dependent variable is based on one question in a residents’ survey in four neighborhoods of the Swedish city Malmö performed in 2012: “Have you abstained from participating in an activity due to concerns of safety in the neighborhood where you live?” with responses graded in frequency, “Very often”, “Often”, “Sometimes”, “No, rarely” or “Never”. The responses were recoded so that “No, rarely” and “Never” registered as a 0 while the three other responses were coded as a 1 (=avoidance behavior).It should be noted that "concerns of safety" is a somewhat unprecise translation to english. The actual word used, "otrygghet", literally means "not feeling safe", and it is related to the english language "fear of crime", but has a much broader meaning.


Individual level independent variables based on the survey (for descriptives see Table below) include dummies for sex, foreign background, age over 60, single household, length of residence over 5 years and subjective poverty.

The level 2 variable for physical disorder is based on observed physical disorder from a Systematic Social Observation (SSO, Sampson & Raundebusch 1999) performed in two rounds during 2011, once during the summer and once during the winter (See Map below for observations plotted). Each observation is based on an object (ie, waste bin, park bench, door etc) with at least one marker of physical disorder (ie, grafitti, vandalism) which was documented with a photograph and tagged with a GPS-location. The log value of the combined number of observations from both SSOs have been aggregated to the micro-neighborhood in this paper.

The third level 2 variable finally is collective efficacy which is based on two items each for trust (Cronbach alpha = .710) and informal social control (Cronbach alpha = .782) departing from the same questions used in Sampson & Wikström (2008). The questions are graded in likert scales from ”Always” to ”Never” , with somewhat low but acceptable reliability (Cronbach alpha for collective efficacy = .735). The data presented here is the micro-neighborhood aggregate of the mean of the four survey items included.